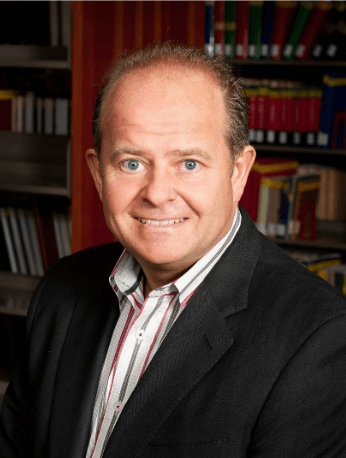 As a Certified Specialist in Civil Litigation with The Law Society of Upper Canada, Robert Hooper practices Personal Injury Law in the Hamilton area. After graduating from the University of Ottawa in 1991 he went on to article at Blake Cassels Graydon in Toronto.

Robert then moved to Hamilton to practice insurance defense for Sullivan Festeryga Lawlor & Arrell. After years of defense work, he switched focus and began working with Morris Law Group. In March, 2001, he founded Hooper Law in the heart of Hamilton, Ontario.

The Office of Hooper Law is built on Rob’s reputation of excelling at trial work along with his team of specialized personal injury lawyers, and professional staff.

Rob Hooper can be found, when not practicing law, focusing his time, energy and passion on such organizations as Canadian Women’s Wheelchair Basketball, Big Brothers Big Sisters, and The Living Rock to name a few. He is also the head coach of the Redeemer University Women’s Basketball Team.

Robert now leads our Association of over 1,014 accomplished and respected members whose history of commitment and service to the community dates from 1879.

Our Team of Experts

Other Articles of Interest:

Do I Have A Claim?

For a free consultation with our personal injury lawyers, please contact us today. We will answer your questions and help you understand what’s involved in the process.

Email us directly at: fightforyou@grossohooperlaw.ca

We will contact you within 1 business day. All your information will be kept strictly confidential and only used to brief us on your situation before we call you.

Our offices are centrally located in downtown Hamilton, comfortable, wheelchair friendly and with free parking. If you cannot make it to our office, we will come to your home, hospital or any other location that is convenient for you.