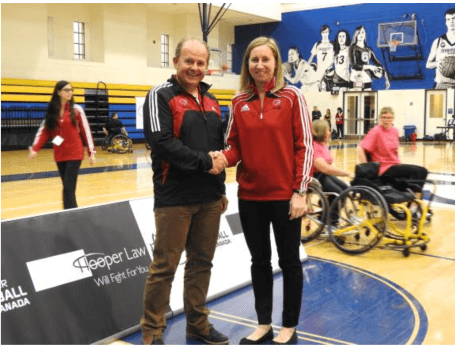 “As proud sponsor of the Canadian Women’s National Wheelchair Basketball Team, Grosso Hooper Law shares the team’s passion and drive to win”, says Rob Hooper, “but most importantly, our growing relationship gives us even better insights and methods to help clients deal with and adjust to physical or emotional adversity as a result of their injury. These athletes offer real life inspiration because they’ve shown it is possible to overcome the challenges they’ve faced, and to excel at the highest levels. Wheelchair Basketball Canada enables them to grow as athletes and as individuals”.

“Wheelchair Basketball Canada believes in the power of sport to improve people’s lives and we are thrilled to work with Grosso Hooper Law, a dedicated firm that shares that belief,” said Executive Director Wendy Gittens. “Our women’s national team program is unwavering in its pursuit of athletic excellence and Grosso Hooper Law is an important partner in supporting Team Canada as our women continue to strive for the podium.”

The Canadian Women’s National Team is amongst the most successful teams in the entire history of Canadian amateur sports and a force to be reckoned with on the international wheelchair basketball stage. The Canadian women are three-time Paralympic champions and have reached the podium at seven consecutive world championships since the inaugural event in 1990, which includes capturing the world title on home soil in 2014.

Wheelchair Basketball Canada is the national sport governing body responsible for the organization of the sport in Canada. It is a non-profit, charitable organization that is committed to excellence in the development, support and promotion of wheelchair basketball programs and services for all Canadians from grassroots to high performance. Wheelchair basketball is a fast-paced, hard-hitting, competitive sport in which Canada is held in high esteem around the world.

OUR COMMITMENT: Every year, we invest back into our community and in charities for people at risk.

Other Articles of Interest:

Fighting Off the Court

Fighting for victims, the less fortunate and those in need is at the heart of all we do. Every year, we invest back into our community and charities for people at risk.